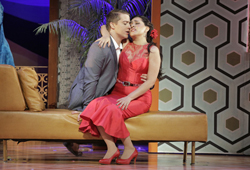 The Lyric Opera’s production of Rossini’s The Barber of Seville is a light, preposterous love story that is the ancestor of 1930s screwball comedies.

Based on Le Barbier de Séville, a French comedy written by Pierre Beaumarchais in 1775, Rossini’s opera premiered in 1816 at Rome’s Teatro Argentina.

The sultry young Rosina (the excellent Cassandra Zoe Vlasco) has fallen for Lindoro (Jack Swanson), a poor young student who serenades her on the street under her window. She’s the assistant to closet-kink ophthalmologist Dr. Bartolo. She seems to live in the same house/office with Bartolo, who also seems to be her guardian: he threatens to lock Rosalina in the house to prevent her from seeing Lindoro. (Just go with it.) Only later will she learn that the singer is – Count Almaviva!

Modern setting with a 60s feel

Originally set in 17th century Seville, Spain, Lyric’s production directed by Michael Shell, is set in modern Seville during the April Fair, in some nebulous year sometime after 1968. Shell and his production team, which includes scenic designer Shoko Kambara, costume designer Amanda Seymour, and lighting designer Driscoll Otto, were influenced by Spanish filmmaker Pedro Almodovar. The set is fluid, the lighting clear and, usually, bright, with a closetful of saucy costumes.

The production has a decidedly 1960s Bohemian influence, with touches such as nuns drinking from a garter flask and smoking what just might be a joint. Seymour’s costumes continue the 60s-era look with Figaro’s long, blue frock featuring well-placed, realistic eyes looking out at us. When Lindoro masquerades as Rosina’s music teacher, he’s dressed like a hippie, replete with long hair, beard, wild shirt, leather vest and those wide-striped pants that were so popular then (OK, I had some too). And, instead of a guitar, Lindoro carries a sitar, an absolutely inspired stage prop.

Kambara’s set is a pop art visual treat with enough realism to ground the production. Cast members play the exaggerated, campy, sexy physicality to the hilt. As Don Basilio, a fixer, schemer and Roslina’s real music teacher, grinds his way through several songs and come-ons, all in his striped purple suit.

As Dr. Bartolo’s maid, Berta, Ruby Dibble effortlessly sashays her way through the performance with more costume changes than lines. Dibble manages to say more when smoking a cigarette, mixing a drink or with a wiggle, although she has a nice, poignant aria about being unloved: ” What on earth is all this love . . . which makes everyone go mad? . . . Unhappy me, I also feel it . . . I shall die in desperation.” (No, she won’t.)

The ubiquitous affable, gregarious Figaro (Jarrett Ott) is the master of ceremonies. He loves his work and all of life. Figaro keeps things moving, ensures all is right in the heavens and true love prevails.

Fun playing at the edge

There were a couple of places where the production veered to the edge of crass silliness, and I’m not sure the audience was there with it but enough remembered that The Barber of Seville is supposed to be funny and outrageous.