I remember exactly where I was Thursday, August 8, 1974, the night Richard Nixon announced his impending resignation 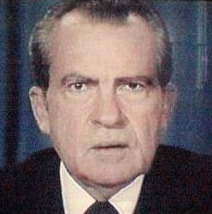 I and a friend were glued to the radio in his car, parked outside the house where our band was practicing. Band practice or not, Nixon’s speech was not to be missed. Not all the band members felt that way.

Things had not been going well for Nixon that summer. The Watergate scandal was closing in on him but the embattled president clung to power, stonewalling to the bitter end. Finally, on August 8 we learned that he would address the nation that evening, 8 p.m. Central time. Lee, the band’s drummer and my best friend (I was the bass player), and I knew we’d be at practice but planned to listen on the radio if nothing else.

We were rehearsing at the home of our organ player’s parents in sunny suburban Kansas City North, aka north of the river. Bruce was a good player and – extra attraction – had a Hammond B3! It was stripped of its wooden casing and put in a blue vinyl, roll-and-pleated box (like a Kustom amp), and mounted on a folding stand, sort of like an ambulance gurney. It was still a heavy mother to shlep, but was way easier than a standard B3’s tonnage.

Rehearsal started at 7 p.m. and was going well. We couldn’t smoke dope at Bruce’s place, so Lee and I had taken appropriate steps on the drive up. After going over some current tunes, we worked on some new stuff. Just before 8, I suggested that we take a break to listen to Nixon. Both Lee and I were taken aback that none of the others wanted to listen. Although we could see their point, we almost pleaded with them to stop and listen to the speech.

“Look, this is history!” I said. “We can practice any time but we’ll never get a chance to hear something like this first-hand!” John, the lead guitar guy, Bruce, and Mark the sax player were adamant that we keep rehearsing. Nope. Nothing doing. Not gonna listen.

None of them seemed to be fans of Tricky Dick, but Nixon’s speech didn’t mean anything to them. They just wanted keep practicing rather than witness, even in a small way, a historical event of great import for the country. So, fuck it. Lee and I went out to his car and sat in the heat of a sultry August Kansas City evening and listed. Neither of us spoke. It was too compelling.

Nixon’s speech lasted about 15 minutes. When we went back in the garage to practice, everyone was where we had left them. Bruce was sitting at the Hammond, John and Mark standing by their amps dinking around. We resumed rehearsal and quit about 9:30.

Over the years, the Republicans never got over the fact that a president from their party, even if it was Nixon, resigned. Or, as some are wont to say, was hounded out of office. Republicans have never stopped looking for that perfect impeachable offense they could lay on a Democratic president. Clutching at straws, Republicans did manage to impeach Bill Clinton on perjury and obstruction of justice, charges which he handed them by lying to a grand jury about his affair with Monica Lewinsky, on December 19, 1998. Nonetheless, Clinton was not removed from office.
Not satisfied with the phony little Clinton impeachment, lately some Republicans and T-baggers have been making noises about impeaching President Obama or, if not him, member of his cabinet (if indeed they can be impeached).

They’re like a dog with a bone. They just can’t let it go and move on. Nixon had to go. Now we have numbskull no-nothings striking out blindly in desperate ploys to impeach something – anything – to get even. They are making a mockery of our democracy.

It’s sad. Republicans in 1974 were right there with Democrats about Nixon. It was Tennessee Senator Howard Baker who asked the immortal question, “What did the president know, and when did he know it?”

None of this excuses any president before or after Nixon. You only have to read The Burglary to learn how far down our government has stooped and is stooping.

As you may guess, our band never achieved anything within half a dozen galaxies of Beatlemania. Even if it had, I would never have regretted hearing Nixon live on the radio (naturally, we missed it on TV) announcing his resignation, which took effect at noon the next day, Friday, August 9, 1974. He said he never was a quitter. But he was a bullshitter.