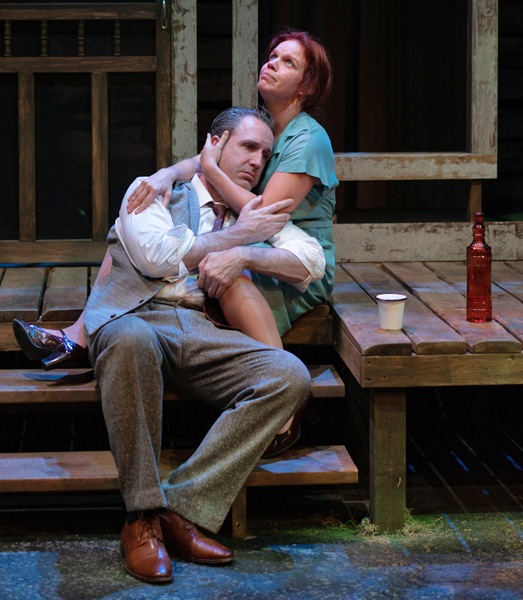 Eugene O’Neill’s A Moon for the Misbegotten, the sequel to his Pulitzer Prize-winning A Long Day’s Journey into Night, is a hard-bitten play about love, dissembling, and destruction, with a side of class warfare.

Gary Mosby’s set for A Moon for the Misbegotten never changes from scene to scene, lit without warmth by Shane Rowse. After the curtain goes up, the pre-show banjo music gives way to lonely, almost sinister tracks by Jon Robertson. Gradually, you may feel as trapped in that bleak, decrepit cabin as are Irish tenant pig farmer Phil Hogan and his daughter Josie.

Thanks to Mark Robbins’ directing and exceptional acting, the Kansas City Actors Theater production takes a play that is almost unrelentingly depressing and, in effect, makes a silk purse out of a sow’s ear.

This is especially true in two scenes where the script waxes on and on far too long; luckily, the actors carry the weight for us. The first is the opening, where Mike (Charlie Spillers), who is packed and ready to leave home to seek his fortune. He is almost upended in a heated discussion with his sister, Josie (the estimable Ashley Pankow), on his overly virtuous nature and her lack of virtue. They both agree on the miserly habits of their father, Phil (the redoubtable Victor Raider-Wexler).

Second is a debauched, drunken James Tyrone Jr. (Brian Paulette) lying dead-still in Josie’s arms. Drenched in moonlight, he tells the long, drawn-out story of his mother’s death out west, his long train ride to back east, and his meeting a prostitute during the trip.

A Moon for the Misbegotten briefly springs to life in the comic scene where Phil’s neighbor, T. Steadman Harder (gamely played by Chris Roady), who is flush with Standard Oil Money. Harder arrives looking much the swell, dressed in elegant riding clothes and boots with nary a scuff, brandishing a riding crop, to complain about Phil’s hogs polluting his ice pond (ice blocks were cut in winter and stored in insulated ice houses for use in the summer cocktails). In the ensuing melee, Josie relieves Harder of his riding crop and puts it to good use.

Phil’s disdain for the haves is more than a match for Harder’s condescension to the have-nots. Several times during the play Phil mentions Harder’s Standard Oil Money in disparaging terms. The play is set in 1923, shortly after the Teapot Dome scandal involving Standard Oil, surely a topic of discussion with O’Neill’s Greenwich Village friends in the Communist Labor Party.

Paulette’s James portrays the ambivalence of a man who distrusts his own emotions, who carries the tired apathy of someone on his last legs. He loves Josie, but she doesn’t believe it because he can’t admit it to himself, until it’s too late for both of them.

Raider-Wexler’s Phil is tired but still has lots of fight left in him. Raider-Wexler adds pathos to a man who, through his constant scheming, almost outwits himself.

Although A Moon for the Misbegotten is James’ story, Pankow owns the show as brassy, bawdy Josie. From her accent to her tough stance, Pankow makes Josie a force of nature. Whether O’Neill intended it or not, Josie is the last one standing. She does the cooking, tends the fields and mothers James through the night until sunrise.

James loves Josie and she him, but he still departs. Instead of stopping him, she calls sadly after: ”May you have your wish and die in your sleep soon, Jim darling. May you rest forever in forgiveness and peace.” Time for Josie to make breakfast.