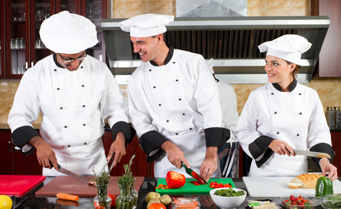 Every profession and occupation has its own brand of humor, usually intelligible only to insiders

And each group takes its humor seriously. When you joke with your co-workers about your boss, each other, another work group, or even when your boss jokes with you, it’s more than idle humor. And if you’ve ever worked for a company that tried to stifle workplace humor, you know it’s practically impossible.
Kitchen Antics: The Importance of Humor and Maintaining Professionalism at Work is a 2009 study of workplace humor by Owen Hanley Lynch, PhD, a communication professor at Southern Methodist University in Dallas. Lynch focused on professional chefs in a hotel kitchen that had received the second highest AAA rating – four diamonds.

To gather data, researchers often observe subjects, interview them and ask them to complete a questionnaire. Lynch took a hands-on approach. To become totally immersed in workplace humor, Lynch worked in the kitchen for a year and, indeed, had the chops to be a fully accepted chef.

The group comprised 12 chefs (including Lynch), four cooks, five trainee chefs, and one executive chef, 22 in all. If you’ve ever done any kind of restaurant work, you’ll appreciate Lynch’s achievement.

Workers use humor to maintain professional standards, separate themselves from management, resist management control and blow off steam. Workplace humor is tolerated because it resists company hierarchy without threatening it.

What’s funny to insiders probably won’t be funny to outsiders. The chefs often played pranks on each other, such as surreptitiously heating a chef’s pot handle over the fire. They got a laugh while reminding the chef on the receiving end to stay alert. The chefs took it all in stride without complaint. That was the unspoken rule. Whining only led to more devious gags. And besides, the chef on the short end would be dishing it out soon enough.

Workplace humor is a two-way street

Management can also use humor, in this case to control production. Miffed that salads for an event were late, a banquet manager bet that he could make salads faster than Mitchell, a cook. The chefs jeered but the manager knew he’d get the last laugh: He lost the bet but from then on salad orders were always on time.
Had Mitchell lost the salad challenge, he faced merciless ridicule. As it was, the chefs teased him because he beat a mere banquet manager.

When the food and beverage manager thought chefs in the kitchen were talking too much, he assigned them different workstations. In protest, all the chefs wore nametags with the same name. Greeted by five Johns on the hotline, the director laughed and gave up the idea.

Nicknames are the most common form of kitchen humor. Chefs answered to their nicknames only among each other, never to outsiders. Managers who used a chef’s nickname to ingratiate themselves broke the most serious taboo of all.

Workplace humor relieves stress and allows us to identify with co-workers and other professionals. Humor lets us resist perceived managerial boneheadedness and maintain “creative input and control” on the job. Savvy managers use humor to exert control without giving direct orders.

“Work group humor is an integral function in human organizing,” concludes Lynch. Next time you’re in a restaurant, waiting for your food to arrive, and you hear laughter coming from the kitchen, it’s no joke. There’s serious work going on back there.