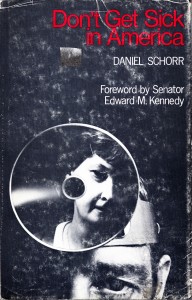 In his preface, Schorr explains the report and the book provide a look at the health industry “as perceived by the consumer, not the supplier. It is the patient more than the doctor who is in trouble. It is he, ultimately, who will require a long-overdue change in America’s healthcare system.”

Schorr’s title comes from Johan van der Sande, who moved from Holland to California in 1957 and became a successful accountant in Los Angeles. In 1969, he was hospitalized at Mount Sinai Medical Center with kidney disease. Because he couldn’t work, he fell behind on his mortgage payments.
Although his insurer, Blue Cross, paid the first $20,000 of his $22,000 bill, Sande required dialysis to stay alive. Blue Cross did not cover the $25,000 for his home dialysis unit and its $5,000 annual operating costs. Sande’s friends started what amounted to an early form of crowdsourcing to help him pay.

Donations eventually dwindled, and Sande heeded the advice of his family and moved back to Holland. National insurance was $24 a month, with full coverage of hospital, doctors’ and drug bills. Interviewed at home in Holland, Sande said that while Holland saw healthcare as a right, in America, at some point, you are on your own.

Sand concluded, “I feel that America is a good place to live if you’re healthy. But don’t get sick in America!”

In his engaging autobiography, Staying Tuned: A Life in Journalism, Schorr mentioned Don’t Get Sick in passing. Considering recent healthcare history, reading Schorr’s view from 1970 was a natural.

I have watched T.R. Reid’s 2008 documentary, Sick Around the World, and read his 2010 book, The Healing of America. I watched the tortuous passing the Affordable Care Act and the continuing efforts of Republicans to kill it. In October 2013 I struggled with the half-baked healthcare.gov website.

Not until January 2014 did I get the issues resolved. Turned out that I only needed to remove the apostrophe from my wife’s last name. Who knew? Certainly none of the eight or nine people I talked to on phone support on healthcare.gov. Finally Stefani, on the Galactic Overlord support level, figured it out. So far, the insurance works great.

Reid and Schorr begin by praising the “miracles wrought by American medicine” and its technology. Where Reid’s basic question asks how many people in a given country go bankrupt because of healthcare costs, Schorr wants to know “why the world’s wealthiest nation is far from being the healthiest.” Why can’t Americans gain “access to these miracles within their means?”

In 1970, few general practitioners wanted to live and work in small towns. The hours are long, the financial incentive low. Eighty-hour weeks, 24-hour demands with no vacations take their toll. In Poughkeepsie, New York, Schorr talked to Dr. George Kraus, who gave up his practice after 15 years. “I offered it gratis to anyone that I thought capable of handling it, and unfortunately there was no one interested in it.”

Today, according to the National Institutes of Health, “The relative shortage of physicians in rural areas of the United States is one of the few constants in any description of the US medical care system.”

Healthcare costs continue to rise. Schorr notes that in 1970, there was “the belated catch-up in sub-standard wages.” Labor is a large part of any hospital’s costs. At that time in the South, hospital employees earned as low as 35 cents an hour. Unionization, strikes and minimum-wage requirements helped hospital employees earn more, but that added to what patients paid.

The other cost was technology, “resulting in a fabulously expensive array of new medical hardware.” Whether they benefited or not, all patients shared the cost, and still do. Today, hospitals are in an arms race to see who can tout the most advanced imaging technology, robotic surgery equipment, and cancer-killing radiation therapies. We all share the cost of these advances.

Insurance coverage was spotty. Abe Yellowitz’s insurance paid $42,000 out of $53,000 – a good chunk – leaving him owing $11,000. Then it developed that “I owed the hospital another $12,500, for which I am now being billed and sued.” How the Affordable Care Act addresses this remains to be seen.

For the poor, access to healthcare was often nonexistent. With no money for out-of-pocket expenses, they relied on Medicare and Medicaid. Having been signed into law in 1965, Medicare and Medicaid were in financial crisis by 1970, resulting in inadequate care for many.

The ACA subsidizes people who earn less than 400% of the federal poverty level (for a family of four it’s $23,850; for one person it’s $11,670). Those earning below the poverty level qualify for health insurance under Medicaid. But 24 states have refused – out of sheer cussedness – to expand Medicaid coverage to help the poor, leaving these people without insurance at all.

Preventive care, or wellness programs, were not even on the horizon in 1970, and have only recently been recognized as helping lower healthcare costs. Sadly, many employers are using these programs as ways to monitor employee activity during nonworking hours.

In 1970, the American Medical Association labeled national health insurance “Socialism and Communism—inciting to revolution.” Today, the ruse of “socialized medicine” is alive and well.

Schorr, who died July 23, 2010, lived just barely long enough to see what may be the real beginning of joining the “rest of the civilized world” when Congress passed the Patient Protection and Affordable Care Act. Or what Republicans and Tea-baggers derisively call “Obamacare.”

It remains to be seen whether the Affordable Care Act becomes a truly national healthcare program that can help Americans lead healthier lives or just another way for big pharma and medicine to squeeze us dry. Daniel Schorr’s Don’t Get Sick in America shows that although healthcare has made astounding advances over the last 44 years, we have a long way to go in ensuring everyone in America has access to it.  We’re still on our own.