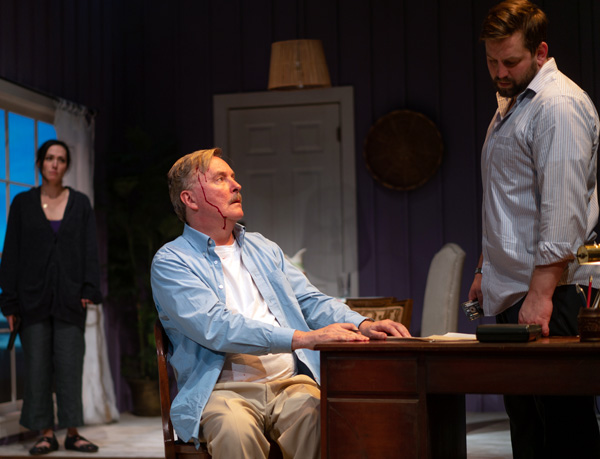 Death and the Maiden at Kansas City Actors Theatre is riveting – this is the play for our times.

The setting is banal. A house by the sea, simple furnishings, not big. Comfortable. It is sometime in the evening. A woman is moving around the living room.

We hear a car drive up, and the woman freezes and listens. Then she quickly turns out the lights, peeks out the window, and rushes to a desk on the other side of the room. She opens a drawer and retrieves what appears to be a .45 automatic. She silently rushes back near the door, and waits. She is terrified of whoever might be out there.

It’s her husband who comes through the door. He has had a flat tire on the way home and a good Samaritan stopped and helped him and give him a ride home.

Ariel Dorfman Death and the Maiden is set in Chile during the early 1990s. The country is transitioning from the brutal Pinochet military dictatorship to a shaky democracy. There are people still traumatized from being tortured, and further traumatized from knowing their torturers are living everyday lives among them.

The production by Kansas City Actors Theatre is intensely concise. Gary Mosby’s scenic design is elegant and sparse. I loved how you can look out the home’s picture window to watch the sea breaking on the beach, ebbing and flowing, like the action inside. Jonathan Roberson’s sound is by turns soothing and foreboding.

Director Cinnamon Schultz paces the action to instill maximum anxiety in the audience. The actors maintain a triangle of tension that keeps us wondering how things will play out. Gerardo (Rusty Sneary) tries to walk a fine line. Roberto (Robert Gibby Brand) is cool and calm. As Paulina, Vanessa Severo is relentless.

Paulina is married to Gerardo. She was tortured and raped and tortured and raped during captivity in 1975. Gerardo is a lawyer who just accepted a position to investigate, if not prosecute, those responsible for abuses (nice euphemism, that) during Pinochet’s military dictatorship.

Roberto is the nice guy who helped Gerardo with the flat tire. His full name is Dr. Roberto Miranda. Gerardo tells Paulina he invited Roberto over for a drink Sunday, the next day. She is not thrilled.

But Roberto shows up around midnight, knocking “first timidly, then more strongly,” (as the stage directions note), waking Gerardo and Paulina. Gerardo, the good host, and Roberto talk in the house, while Paulina spies from the veranda, listening carefully.

Paulina is convinced Roberto is the same Dr. Miranda who tortured and raped her so many times (yet she kept count), all the while doing unspeakable acts to the music of Schubert.

Is Roberto really the doctor who tortured her all those years ago? Did he just “happen” to help Gerardo? Why did he come by so late when he was invited the next day?

Brand’s Roberto acts civilized and cultured, in that way that Brand excels at. But there are some moments, when he is tied to the chair, that Brand alternates between unbridled fear for his life and cold, slit-eyed evil who would do what Paulina says he did all over again if he could only untie himself. It’s a chilling portrayal.

Death and the Maiden confronts us with the question: If you had the chance would you kill your torturer?

Paulina is at first is ready to kill Roberto. It has been 15 years for Pauline, but that is not long enough to forget. Is there a “long enough”? What about the boys who experienced sexual abuse by Catholic priests? What about survivors of the Jewish Holocaust in WWII? The Jews tracked down Eichmann, put him on trial and hanged him in 1961.

But Gerardo the lawyer talks Paulina out of killing Roberto, for the time being. What does she really want?

Near the end, Paulina is pointing that .45 at Roberto’s face. He is tied up, pleading his innocence but dissembling. Fed up, Paulina is giving him to the count of ten to confess. If he does not, she will shoot him.

ROBERTO: So someone did terrible things to you and now you’re doing something terrible to me and tomorrow somebody else is going to—

PAULINA: And why does it always have to be the people like me who have to sacrifice, why are we always the ones who have to make concessions when something has to be conceded, why?

This is the crux not just of Death and the Maiden but the times we live in now.

At the end, Gerardo and Paulina have presented their findings. There is wild applause for the cause of justice, while Dr. Miranda lingers in the shadows offstage.