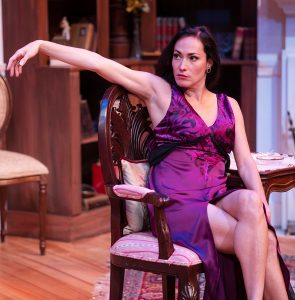 A “farce in three acts,” as Coward describes it, Blithe Spirit centers on the relationships of novelist Charles Condomine (Coleman Crenshaw) with his current wife, Ruth (Cinnamon Schultz), and his former wife, Elvira (Vanessa Severo).

Although Blithe Spirit could easily be set in the present, it has more charm as a period piece. Kelli Harrod’s set is the perfect, well-appointed English drawing room; Sarah M. Oliver’s costumes fit to a T; and it’s all tied together by Jon Robertson’s soundscape, including the theme song, “Always.”

Charles and Ruth have been married five years, but Ruth can’t help but compare their marriage to Charles and Elvira’s, even though Elvira has been dead or, as she later says, “Passed over. It’s considered very vulgar to say dead where I come from.”

Ruth is smart, reserved, and supportive of Charles. Elvira was always ready for a party or an affair, and not shy about using her rapier wit, even though she deeply loved Charles. Whom Charles is more physically attracted to or loves best is only rhetorical speculation until Charles and Ruth host a dinner with their friends Dr. and Mrs. Bradman (Matt Rapport and Cheryl Weaver), and Madame Arcati (Jan Rogge), who conducts a séance. Ostensibly, Charles invited Arcati so he can surreptitiously glean information on psychic techniques for his next novel. Witty both mentally and physically, Rogge’s Madame Arcati is delightful.

Charles gets more than he bargained for when Elvira appears and only he can see and hear her, which makes Ruth question his love for her and his sanity. Severo uses her preternatural comic gifts to embody Elvira. From moment she enters through double doors from the garden, she owns the stage. Seductive and petulant, Elvira schemes to get Charles away from Ruth, who cannot see or hear her. With cutting one-liners back and forth, the rapid repartee among Charles, Elvira and Ruth recalls the screwball comedies of the era.

Each of the of the other actors has a strong stage presence, and none is overshadowed by Severo and Rogge. This includes Margaret Shelby as Edith, the maid, who earned a round of applause for her deft handling of wobbly stack of tableware.

Naturally, Elvira’s plan goes awry. Charles, Ruth and Elvira learn too late that it’s destructive to relive the past. Blithe Spirit shows that if you’re laughing, you ain’t dead yet.