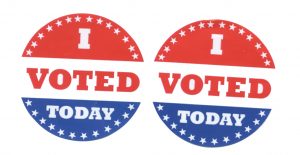 The Missouri primary election is Tuesday, August 4, 2020. Today we, Molly Margaret and I, went to the Kansas City Board of Election Commissioners office in Union Station. We cast our absentee ballots for governor, U.S. congressional representatives, and whether to expand Medicaid, which Missouri has so far refused to do.

The reason we voted absentee is that we will be out of town on election day. I have never voted absentee, and neither has Molly Margaret. But this is one time we needed to and almost didn’t make it. We decided to head to the lake, not really on a whim but, maybe. Last Monday, July 20, I realized we’d be out of town and then learned the deadline for requesting an absentee ballot was Wednesday, July 22.

You can request an absentee ballot online

The election board website says you can request an absentee ballot by mail, phone, or email. You can return them by mail, fax or email. (I sure don’t have a fax machine anymore. Do you? Doctors and medical offices still use them.)

I figured email would be the fastest way. I downloaded the forms and we completed them, signed them, scanned them – because although you can fill out the PDF form, you have to print and actually sign it, in ink – and emailed them posthaste back to absenteevoting@kceb.org that very day, sure we would soon receive them. The election board notes that, “Once an application is received, a ballot will be mailed to the voter within three business days.”

By today, Tuesday, July 28, we still did not have absentee ballots. I called the election board to see what the deal was. The nice gentleman (all the men and women I spoke with were nice) said there was no record of my email, but noted I could come to the election board and vote before we left town. He then forwarded me to whoever it is who handles absentee ballot requests.

That person’s voicemail box was full. I could not leave a message, nor was there an option return to square one. The system hung up on me.

I called three more times, reaching a woman whose name I didn’t catch; a woman named Courtney; and back to the original guy, who didn’t mention is name, and I didn’t ask. Each time they tried to connect me to the absentee voting person, or maybe it was whoever in charge of receiving emails or other requests. Each time, the voicemail box was still full.

We decided that we would just go to the damn election board at Union Station, pay five bucks to park, and vote in absentia in person.

The people in the absentee voting room were nice. I told the guy helping me, while a woman helped Molly Margaret, how we came to be there. He nodded, “Well, it’s better to come here because you get to see everybody.” I agreed, telling him that’s why I always like going the polls, and we all laughed in agreement.

We got our ballots, voted, and left, thanking the nice people. It really was a pleasant experience! There were only a two others voting; it was not at all crowded. So there’s that. I can’t help but wonder if the person’s voicemail box is full, meaning it hasn’t been checked, maybe he or she hasn’t checked the email account either.

This is the primary vote. We’ll probably vote at the polls. But voting, absentee or may be crucial if the risk for COVID-19 is high. So we’ll see. I hope our experience today is not a harbinger.