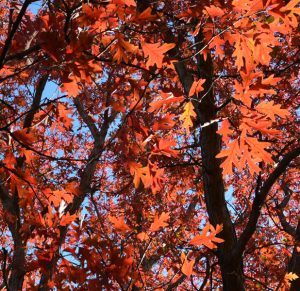 It was during that summer of 1984, while I was living in Long Beach, California, that I first saw them. The two guys cutting the grass in the tiny front yard of the house across the street had finished and put the mowers and weed whackers in their truck. I thought they were getting ready either to rake up the clippings, such as they were, or just pack up and leave. Instead, they got these other machines from the truck that looked like vacuum cleaners or maybe those things the Ghostbusters wore.

Each man pulled sharply on a starting cord, and the machines whirred noisily to life. The guys slung the machines on their backs like flamethrowers and went back to work. They moved intently along the walk from the house to the curb, blowing the grass clippings, such as they were, before them. Not vacuuming, blowing. So these fancy gizmos were blowers – gasoline-powered air blowers! They were using gas-powered air blowers in a part of the country which bemoans, or enshrines, its smog levels and has moved to ban outdoor barbecuing.

I figured they would blow the clippings, such as they were, into a bag and haul them off. But no. They were merely blowing them out of the way, off the walk leading to the porch, off the driveway, out onto the public sidewalk and into the street. Only when this was done did they pack up and leave. The clippings, such as they were, had not gone anywhere, really. They merely had been shuffled about.

Now this front yard, fair-sized in that neighborhood, near 7th and Cherry, couldn’t have been more than 20 feet wide by 15 feet deep with a concrete walkway leading to the house. One side of the yard was taken up by a concrete drive leading to the concrete back yard and, as is typical there, a garage that had been converted into another house.

So let’s see. The grass is short, the yard is small and divided by a walk. Nothing, it would seem, that one guy with a push-mower, a rake and a deck broom couldn’t handle in less than half an hour. And yet, two guys have cut it with power mowers, trimmed it with gas-powered weed whackers and blown the clippings, such as they were, out into the street for all to see. Works for me!

Naturally, of course, leaf blowers have made their way inland, even into the heartland, as some are wont to call it. They made inroads gradually at first, but now they’re ubiquitous. No hardware, discount or even department store worth its salt would be without a supply of blowers. They come in gas and electric models, and there may even be solar-powered blowers.

Further weakening our Midwestern moral fiber, to the incessant summer-long drone of power mowers we have added the whine of leaf blowers. Even my lawn guy uses one. (I gotta talk to him about that.) I have seen people blowing grass clippings out of the gutter and others blowing them into it. It doesn’t seem to matter as long as they can blow them somewhere else.

It’s bad enough to blow bone-dry grass clippings, such as they are, into the Long Beach gutter in the summer. In the Midwest, blowers have changed the nature of autumn, which they don’t really have in Southern California, and the sound of autumn, with its dry rustle of dead leaves. Long after the mowers have gone into hibernation, the blowers hum on.

Oh I know, some people still have a sense of responsibility. The guy across the street uses a blower to herd the leaves in his yard into a giant plastic bag, which he then hauls away to the dump, I would like to think, or maybe even a compost heap, but not Roanoke Park. Some cities pick up yard waste, so giant paper bags are the newest household necessity.

Blissfully we blow our leaves away, away from ourselves, across the fence, into the street, away from our little pinpoint of universal space, but not really away to anywhere. The clippings, such as they are, and the leaves, more than such, are still here. People are raking their yards the way some people clean house: Out of sight, out of mind. “Out of my yard, I don’t mind.”

In the end, we just push the leaves around, shuffling them from yard to yard until it just gets too damned cold to mess with them anymore. Finally the winter winds disperse them and the snow crushes them, whence comes the soil to grow next summer’s grass so that, once again, the front walk must be blown free of clippings, such as they are.